4 Comments
By cheerdummy Friends and Family

It’s been a rough couple of weeks for my roommate (and best friend) Aly and I. We’re in the middle of moving to a new apartment and that decision alone has spiraled into a mess of chaotic events.

We were a mere 24 hours late putting in our 30-day notice saying that we did not want to continue our current lease. Due to that mistake, we got stuck paying rent for our current apartment as well as the down payment for our upcoming apartment. Needless to say it was a double whammy that hurt our fragile bank accounts.

Aly and I both eat really healthy (with the exception of ice cream, our current weakness) and are diligent about buying our own groceries. The sight of our fridge right now is a different story, though. We have a half of a red onion, an old artichoke, one hard boiled egg and a package of hot dogs that I stole out of my mom’s freezer when I was home for Mother’s Day. We legitimately had a discussion last night over who would use the last two pieces of bread for their lunch today. Aly won since I used the end pieces for toast on Saturday morning. Oh, life.

The events of this morning were just the cherry on top of a comical few weeks. Aly called me at about 7:20 and nonchalantly asked what I was doing. “I had a really bad nightmare last night so I’m still lying in bed with Rosie,” I told her (Rosie is my bear. I hate nightmares. Judge me.) I asked her what was wrong because she should have been at work by this time. She explained to me that she ran out of gas and was pulled over on the 90 with her flashers on.  “Do you know anyone with a gas can?” she asked. After brainstorming and failing to come up with other options (and somewhat-scolding her for driving with her gas light on), out the door I went.

Of course Delta Sonic was conveniently out of gas cans, so I kept driving down Main St. until I found Auto Zone. Little did I know that a piece of hollowed out plastic that only holds 1.25 gallons costs $15. I bought one, headed back to Delta Sonic and put a measly $5 of gas into the can and hit the road. I legitimately started laughing out loud when I got onto the loop for 90E and saw Aly’s Honda just chillin’ at the end of the lane with its flashers on. I pulled up behind her and continued to laugh as I realized that the door for her gas tank was conveniently on the same side as traffic. At least I’ll die helping my best friend, I thought.

The sight of the two of us trying to deal with this situation was nothing short of hysterical. It was freezing out, Aly didn’t wear a jacket and had wet hair because she showered late this morning, I looked like a lion right out of the cage because I had 2 minutes to get ready before I left to get her and we were both standing over a puny red plastic gas can trying to figure out how to get the gas into her car. It was a messy transfer, but we got it done. Aly broke out the hand sanitizer, I told her to not let this ruin her whole day and after hugging, we parted ways.

As frustrating and stressful as these past few weeks have been for us, we never let it get us down. Instead of spending our money going out, we used a promo code I had and rented a movie from Redbox for .76 cents, used a coupon I had to get a free container of ice cream and then turned our living room into a fort. We split the last four slices of bread, rescue each other off the side of the road and never fail to laugh every single day. That’s what best friends are for.

Hey my friend, it seems your eyes are troubled, care to share your time with me?
Would you say you’re feeling low and so a good idea would be to get it off your mind.

See you and me have a better time than most can dream, have it better than the best, so we can pull on through.
Whatever tears at us, whatever holds us down and if nothing can be done, we’ll make the best of what’s around.

Sometimes all you can do is look at a crummy situation, accept it for what it is and then laugh your way through it until things get better. And if you’re lucky like me, you have a best friend who will be laughing right there with you through all of the ups and downs. 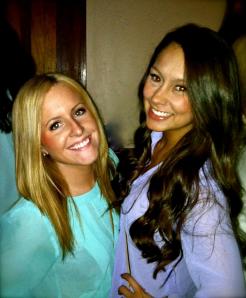 “Turns out not where but who you’re with that really matters.”